Old agricultural postcard - but of what?

Old agricultural postcard - but of what?

I was wondering if anyone could help identify what is happening in the scene on this vintage postcard. Lots of numbered pails on a trestle table. Judging of produce at a show perhaps? Or just a well organised lunch? Appear to be a couple of outdoor stoves in the background and a couple of people are eating. Any suggestions welcome! 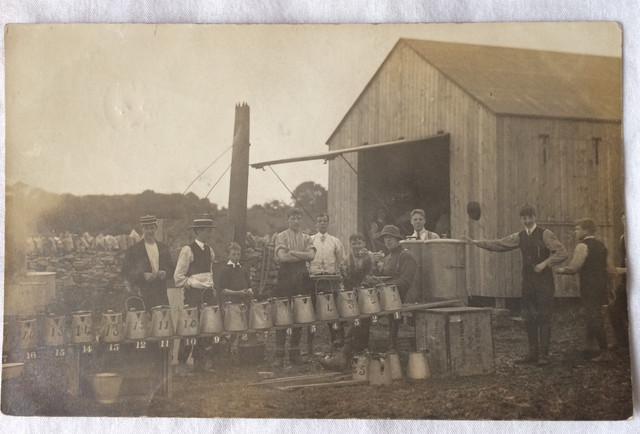 Difficult to say exactly what's going on. The containers look to be milk pails, probably made of copper.

I doubt very much it's a judging process at an agricultural show - looks too workaday for that and the building in the background would suggest it was taken on-farm.

It could be a milk-testing programme. Given the likely age of the postcard, each pail contains the milk from an individual cow in the herd - average herd sizes being much smaller and cows' milk yields being much lower than today.

The large cylinders towards the right of the picture might be cream separators; they could be testing which cows provided the highest butterfat content.

The dry-stone wall in the background looks to place the picture in the Cotswolds (style, size of stone).

Firstly, the building. Felt-roofed timber construction and the visible end is raised off the floor - suggestive of an internal timber floor - so probably not a milking shed. Also large hinged panels in the side for ventilation.

Thirdly, there is what appears to be a steam engine chimney supported by wire stays in the background.

Fourthly, there is an upended tea chest - does that give any clues?

Finally, not a woman in sight - somewhat unusual for vintage dairy activities!

by Agromaven
Yes, I noticed the raised floor of the shed and the hinged panels. Certainly unlikely to be a milking parlour; who knows what might be out of shot, however. I don't think the shed is necessarily connected with whatever activity is using the pails.

An agricultural college is definitely a possibility; pupils might have been undertaking instruction. That would also help to explain the absence of women.

It's possible that the shed in the background was some kind of drying house - raised floor to stop rising damp, the hinged panels to allow through flow, and perhaps some kind of roof vent out of the shot. That would explain the stovepipe, possibly for a heater. The trees are in full leaf in the distance so this would have been a summer shot. And 'new technology' like this would be more likely seen at an ag college than on a random farm.

As for the tea chest: I think it's only there to provide convenient support for the plank on which the pails are resting!

by Alan Wadsworth
I don't think you should discount the absence of women from dairy activities so easily!

In May 1891, Worcestershire County Council made a £700 grant to establish a dairy school: they appointed Miss E A Maidment (lecturer and demonstrator for RASE) as instructress. The dairy school was "migratory" in nature, with lectures given in at least 12 towns in dairying areas of the county. In 1895, the instructress was Miss M Johnstone (Source: R C Gaut, A History of Worcestershire Agriculture, pp. 373-377). Other counties had similar schemes.
Further, in the Evesham Standard & West Midlands Observer, 17/01/1931, it was reported that the Smith sisters continued with success in butter-making competitions: at the annual meeting of the Worcestershire Dairy Students Association, it was reported that Worcestershire’s dairy students had met with marked success in competition work in the past season. In particular, the Championship Butter-Making Competition at the London Dairy Show was won by Miss Mabel Smith, whilst the Butter-Making Competition championship at the Worcestershire Root, Fruit, Grain & Flower Society show was won by Miss Winnie Smith of the same farm.

by cumwhittonbogle
Many thanks everyone for your interesting replies and suggestions.

We had wondered about the boys looking rather posh to be labourers so the idea of an agricultural college is a good one.

Just to pick up on the one detail, what appears to be a tea chest is a packing crate for boot polish “The master polish for boots and shoes” is what the writing upon the box says.

by Alan Wadsworth
Thanks - I was hoping that you might have an image where the inscription on the tea chest could be read - are you able to date the chest from this? What brand was "The master polish for boots and shoes" - and when was it marketed? That might give you a 'terminus post quem' date for the photo.

by cumwhittonbogle
Hi Alan, I should have mentioned in my initial post that the postcard was postally used in 1912 which gives an approximate date.

Nothing more can be seen on the boxes than the words mentioned and the slogan does not turn up any google search results - perhaps the polish was not as great as advertised!

It was sent from Grange over Sands to Cleethorpes but the mundane message contains no clues as to the scene.

The wikipedia entry for Aspatria Agricultural College does carry a circa 1905 image of a class photo of well dressed students in straw boaters etc. So the idea that the boys are students seems very plausible.

The apparatus with the chimney looks to be along the lines of a WW1 era field cooker, so given that some people in the scene are taking refreshments I think it is probably some sort of outdoor catering equipment, possibly unconnected with the pails. It was the numbering of the pails and corresponding numbers on the table which struck me as being on particular interest, but perhaps again this level of organisation could point to an educational connection.

by Agromaven
Here's a poster that relates to the chest: 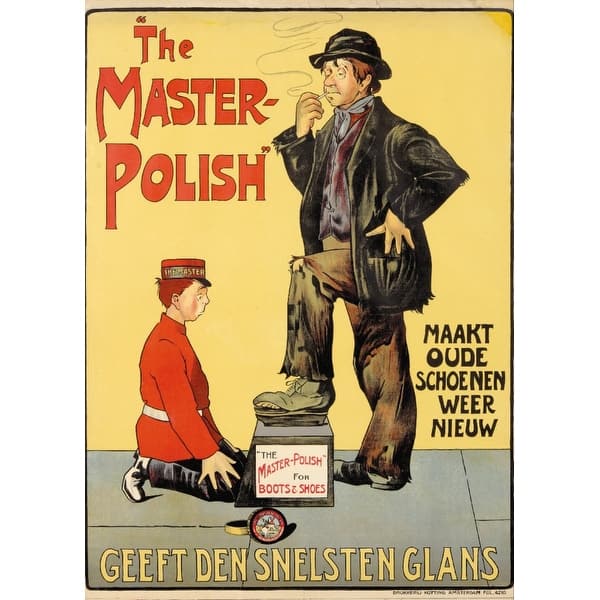 This is cited as circa 1925. The poster is Dutch and I found several other examples of 'The Master Polish' advertising in Dutch newspapers, including a couple from 1909. So the chest is certainly contemporaneous with the postmarked date of the postcard.

Still doesn't help with the activity!

by cumwhittonbogle
That’s an interesting find! Again, perhaps an educational institution would have use for a job lot of boot polish!
All times are UTC+01:00
Page 1 of 1